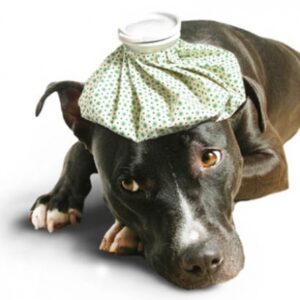 Have you heard of someone dying from a peanut allergy or a bee sting? This is called anaphylaxis. It is a sever allergic reaction that requires immediate attention. Did you know that dogs can have anaphylactic shock too?

A dog will have anaphylactic shock when they are exposed to an allergen to which they have been sensitized. This means they have been previously exposed and had a more mild reaction. The new exposure leads to a more severe reaction because they body is less able to deal with it.

If the reaction is because of a sting, you will often see the first signs of an allergic reaction at the point of contact. such as

If the signs escalate to the following, get your dog to the vet immediately.

If you dog has gone into anaphylaxis you will need immediate emergency treatment. Which may include oxygen, antihistamines, IV fluids, hydrocortisone drugs therapy.

If your dog has had an allergic reaction to a drug, like penicillin, do not give them the drug again.

A dog who has had an allergic reaction to a drug in the past should not be given that drug again.