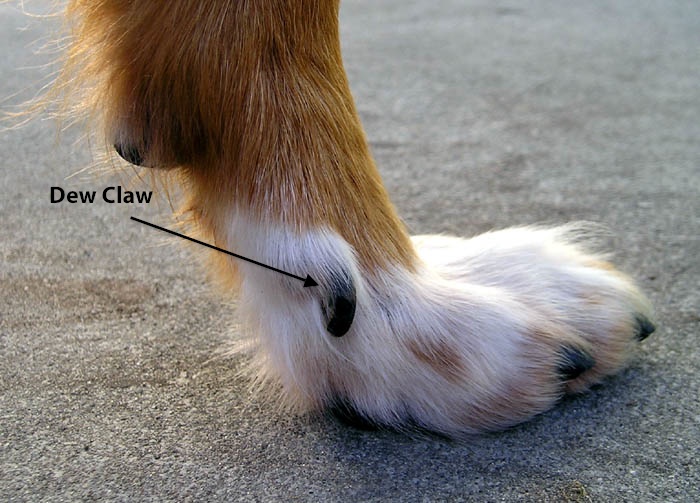 Do or Do Not: The Dewclaw 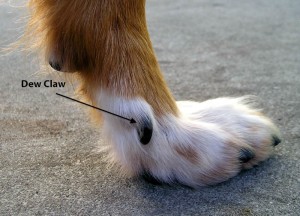 claDo or Do Not: The Dewclaw

The dewclaw is that little extra toe about an inch up from your dogs paw. It is a full toe, with a claw, and it doesn’t seem to have too much purpose. Also called a dog’s “thumb” the dewclaw is on the front legs of most dogs and sometimes on the back leg as well. Dewclaws in the front usually have both muscle and bone in them, though in the back they can lack both muscle and bone.

The dewclaws are not completely useless. They assist in climbing, tearing meat and bone (or toys, as the case may be), and can help with running if they touch the ground. But this funny little toe can also be prone to getting hurt. On some dogs, the dewclaw is quite delicate and is highly prone to getting broken.

Due to its often delicate nature, some people want to remove the dewclaw. This is usually done when dogs are puppy’s. If they are less than 5 days old, they do not need to be put under anesthetic. Often dewclaw removals are done during a spay or neuter. However, most vets frown on removing dewclaws. In some countries, it is illegal to remove them with the exception of hunting dogs (due to a very high risk of the claw getting ripped off).

Beyond the risk of the dewclaw getting caught on things, there is no benefit to removing them. It can also be a painful procedure for you dog.  If your dog has a prominent dewclaw, and you do not remove it, keep the nail trimmed short. This will help prevent it from catching on things.

If your dog is frequently damaging their dewclaw, consult your vet to talk to them about best options. Otherwise, it is best to leave that funny little dog thumb alone.