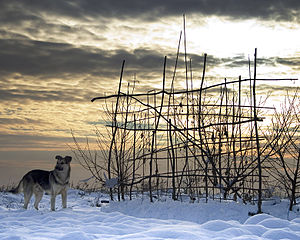 Winter is coming, and with it the cold weather and snow. While the kids are looking forward to breaking out the sleds, sipping hot chocolate and getting out of school for the day, your dog might be just as excited. While certain dog breeds are quite content to be curled up on your lap when the snow starts to fall, there are other breeds that are more than happy to go out and romp and play. If you’re a fan of the cold, or live in an area that gets more snow than most, here are five different breeds of dogs that might be for you. Originally from Siberia, these hale and hearty pups seem to be built for the snow. Used for herding reindeer, pulling sleds and helping to keep their owners warm, Samoyeds are renowned for being able to thrive in harsh conditions and were used to help traverse and explore the north and south poles. Because of their remote origins, Samoyeds are bred independently of other dogs, making them one of four dog breeds to be considered directly descendant of wolves.

This breed is originally from central Asia as well as parts of France and Spain. Named of the Pyrenees mountain range, these dogs are built for the cold. A great Pyrenees has a special double coat that is particularly weather resistant which made them great dogs to protect herds of sheep from predators while keeping them safe from the cold mountain climate. Good for herding sheep or small children on sleds.

Newfoundlands or Newfies have been the breed of choice for many people, including a few United States presidents. The strong, sleek coat of a Newfoundland makes it an ideal choice for colder climates. Newfoundlands are also incredible strong swimmers. Able to not only swim long distances, Newfoundlands also strong enough to pull drowning victims ashore!

These gorgeous pups are one of the oldest and largest breeds of the Arctic sled dogs. Named after an Alaskan Inuit tribe, the Mahlemuts, the Malamute is bred for endurance as they are able to pull large loads over long distances. Malamutes, not only being a hardier breed of dog, also have a thick coat to keep them warm and are recognizable by their fluffy, plumed tails.

When most people think of a snow dog, the husky is one of the first breeds to come to mind. Huskies are an ancient breed of dog, believed to be bred by the Chukchi tribe from the northeastern regions of Asia, hence the Siberian Husky. Not only are Huskies built for the snow, with a dense undercoat, their hunting instincts makes them a perfect choice for a winter hunters.

While these dogs are bred and built for the cold, there’s something about fresh fallen snow that makes a lot of dogs more than happy to go for a romp. Whether you’re playing with a huskie or your lab, it’s important to remember that all dogs can get cold. Resilience doesn’t mean impervious, and if you’re cold, chances are good that they are too. When play time is over, and it’s time to head inside and warm up, you’ll find that a fur coat does a good job of keeping more than just your dog warm.